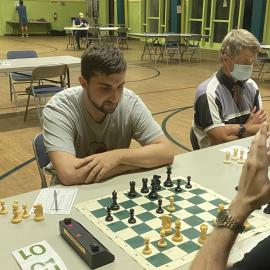 Coach Chris began playing chess in 2014 as a freshman at UC Berkeley, and it quickly became his favorite pastime.  He began playing over the board chess in 2019 at the Kolty Chess Club and has since reached the rank of chess expert.  Chris works as a software engineer, and when he is not working or playing chess he likes to mountain bike, play piano, and go mountaineering.