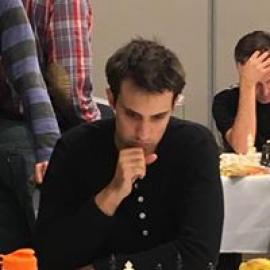 Hello, I’m Coach Theo! I’ve worked for BayAreaChess for more than 3 years. I currently teach at a number of lunch-time and after-school chess classes in Redwood City and other parts of the Peninsula. I’m a big believer in the benefits of chess for kids, and have my own ideas on how kids improve best.

I first learned how to play chess when I was 5 years old. My parents are both international-class players. My dad Peter is a GM, two-time Canadian champion, and a close friend and training partner of the late, great Bobby Fischer. My mother is WIM and former US Chess Federation President, Ruth Haring. It was no fun to be good enough to win the scholastic tournaments I played, but stand no chance when I was at home! So I backed away from chess when I was a teenager, and didn’t pick it up again until I was 20.

After graduating from college with an English degree, I began to study and play more seriously. I’m now a 2100+ Expert, and closing in on National Master. I’m primarily a positional player. I love to grind out endgame wins 😊 I mostly play d4 as white. My defenses of choice include Queen’s Gambit Declined and the King’s Indian Defense.

My dad once asked Bobby Fischer how he studied chess. He answered: Sometimes, I do this, other times I do that…the important thing is that I always have fun while doing it! I believe that, too.

At the lunchtime class I run at Roosevelt Elementary in Redwood City, the kids are always so excited. About 30 kids – almost half of them girls - will run in every week, yelling, “Chess!” Besides playing regular chess, I like to have them play games like “Farmers versus Pigs”: one player has a Queen, while the other player has all 8 pawns. The player with the Farmer (Queen) must stop the Pigs (Pawns) from reaching the fence (8th rank). Or we’ll play “Hand and Brain Chess”: one kid is the brain, and tells what piece to move, while the hand then must decide WHERE to move it.

There is so much to learn in chess, that you also need to be ready to work hard. You need to go over your annotated games to figure out what you did right and wrong. You also need to be resilient. Being able to handle setbacks and criticism is far more important than how talented or smart you are. There’s no more important skill than being able to struggle through a difficult game or whole tournament, and successfully move past it. They say the master is someone who has failed more times than the amateur has ever tried.

Outside of chess, I like to spend time with my wife, rock climb, read play videogames, and hang out with my dogs.